As a war grinds to a close people’s minds turn to life afterwards: a home fit for heroes, a new Jerusalem. Maybe we are not at that stage yet but it’s tempting to start looking at life beyond. What are the prospects for the UK stock market?

A rising tide lifts all boats, and the tide is definitely coming in. So it’s hard to claim the UK will be the  best market in the world this year.  On the other hand, just consider what is happening in front of our eyes each week. London-quoted companies are getting bought, swallowed, gone to corporate heaven. In January alone we saw bids or approaches for three of our investee companies. That brings the tally to six since 1st November. The buyers are generally private equity and based overseas. Remember that Brexit meant for many investors that the UK was on the naughty step. Not any more it seems.

How far did we fall behind? This chart compares the prospective PE ratios of the UK versus the US. There has always been a discount, largely reflecting the heavy weighting of resource stocks in the FTSE100 and the glaring absence of technology stars. But you can see the gap has grown to fairly epic levels. The UK sticks within a narrow range while the US has gone to happy land. The difference in rating extends even within the resource sector. Both Exxon Mobil and Chevron trade on much higher multiples than BP and Royal Dutch Shell. 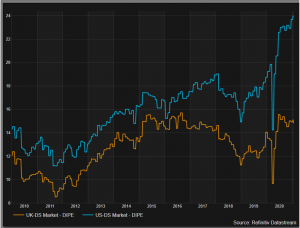 At the very least, this suggests the UK is still on a firm valuation footing – and of course this relative cheapness is a big driver for further takeovers.

As a house we favour smaller growing companies to bigger mature ones. Between January 2010 and January 2021 the FTSE 250 outpaced the overall UK market, ie the FTSE 100, by two thirds. Good small caps have done even better.

The FTSE 250 has a close comparator in the US, namely the Russell 2000 index of ‘smaller’ US companies. In fact the average market values are similar. Here we compare how they have performed. 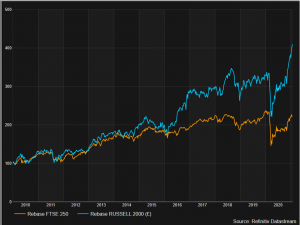 Notice how they moved closely until Brexit arrived. The Russell is adjusted for movement in sterling versus the dollar. If the Russell halved we would be back on terms. But rather it seems more likely to keep partying until the Federal Reserve takes the punchbowl away, not for some time yet.

For US bidders this leaves the UK looking easy pickings with similar growth prospects but a far lower rating. A more active policy by Westminster on foreign takeovers might block some bids but this should only have a marginal effect.

Could a rising pound put a dent in foreigners’ appetite for UK shares? Eventually maybe.

Against the European currencies we seem to be within the normal range as the next chart shows. This compares the sterling-euro rate versus the purchasing power parity for consumer goods. 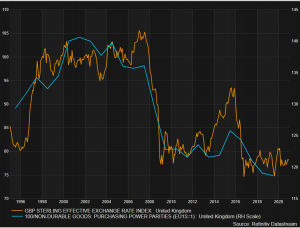 A rise in sterling will tend to depress the shares of larger companies because they earn more from overseas operations. Try to think of a big UK quoted company which exports heavily from the UK: there are sadly few. In any case the prospect of a rising exchange rate makes the UK market more attractive.

So the conclusion we have to draw is that yes, the UK market does look really well placed.

Important: Slater Investments Limited does not offer investment advice or make any recommendations regarding the suitability of its products. No information contained within this article should be construed as advice. Should you feel you need advice, please contact a financial adviser. Past performance is not necessarily a guide to future performance. The value of investments and the income from them may fall as well as rise and be affected by changes in exchange rates, and you may not get back the amount of your original investment.